Archives for the month November 2019 of Genesis8 Amstrad Page

Seen on Twitter, Davide Bucci is the author of adventure games, including On the Queen's footsteps for several platforms.

His game is written with The Adventure Writing System (AWS) by Aristide Torrelli and his own utility aws2c which translates AWS ascii files directly in C code. As his utility uses Z88DK to create the ZX Spectrum version, it was easy for him to write an Amstrad CPC version, thanks to him.

Here is the introduction of the game : today is August 27th, 1904. Nine months ago, you, Emilia Vittorini, joined the Italian Archeological Expedition in Egypt led by Ernesto Schiaparelli, the director of the Egyptian Museum of Turin. You are now back in Genova, Italy: your steam ferry arrived three days ago with 25 wooden boxes containing Queen Nefertari Meritmut's grave goods, a real treasure! They left Genova by train, heading towards Turin, yesterday evening. While they were in transit, you were invited to a sumptuous reception organised by a wealthy art lover, Eugenio Collovati, count of Raligotto, but it would be hard to say that you appreciated the evening. But the reception was yesterday: now, you must catch the train to Turin and check that the treasure arrived safely. I will be your eyes and ears. Good luck.

After the loading screen, press the Return Key to get the start of the game (see second screen below). 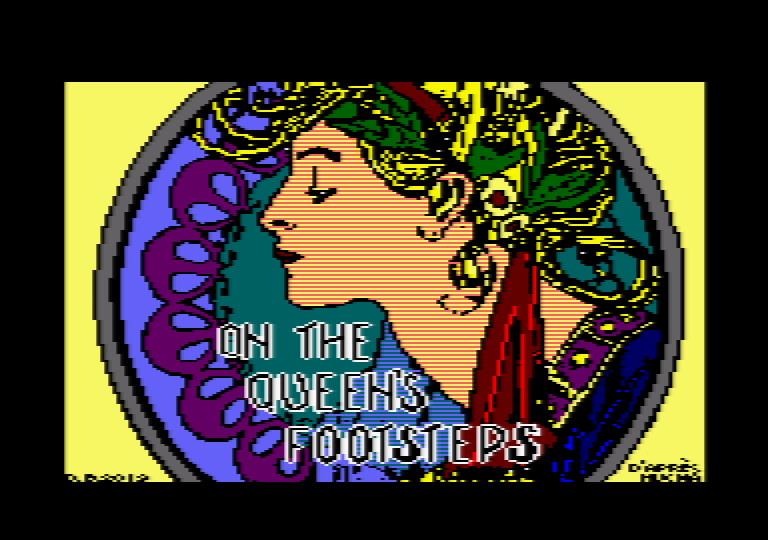 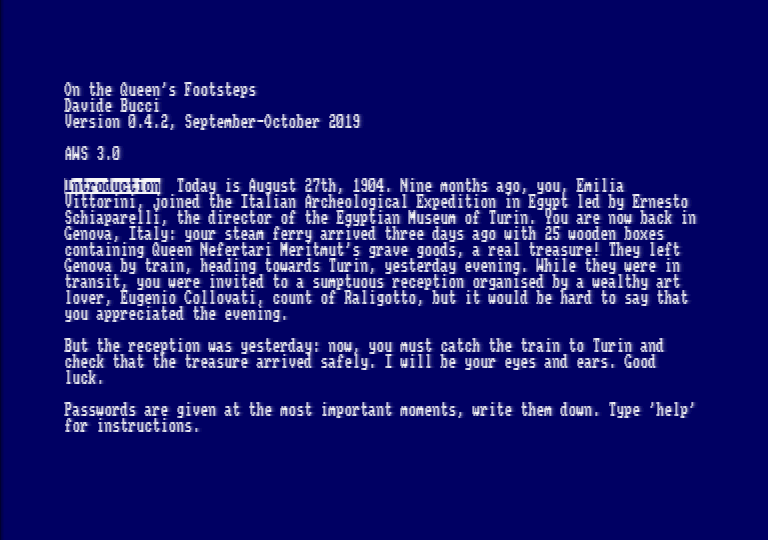 After Hibernated, Stefan Vogt wrote Eight feet under, both games are available. Hibernated 2 is WIP, but the cover of the game is now official on Twitter.

Le Daron is in direct at the alchimie 19 on Twitch, at 23pm the results will be available.

No Recess did announce a WIP Amstrad GX-4000 game, and now the information is known, it's Sonic GX.

The game is programmed by NoRecess (Condense), graphics upgraded by CeD (Condense), audio by Targhan (Arkos) and tests by TotO, Overflow and Longshot.

There is a thread about Sonix GX on CPCWiki. More informations will be revealed in the Blast Annual 2020 (WIP newspaper). The game will be released officially in 2020.

A second video of Sonix GX is on Youtube. 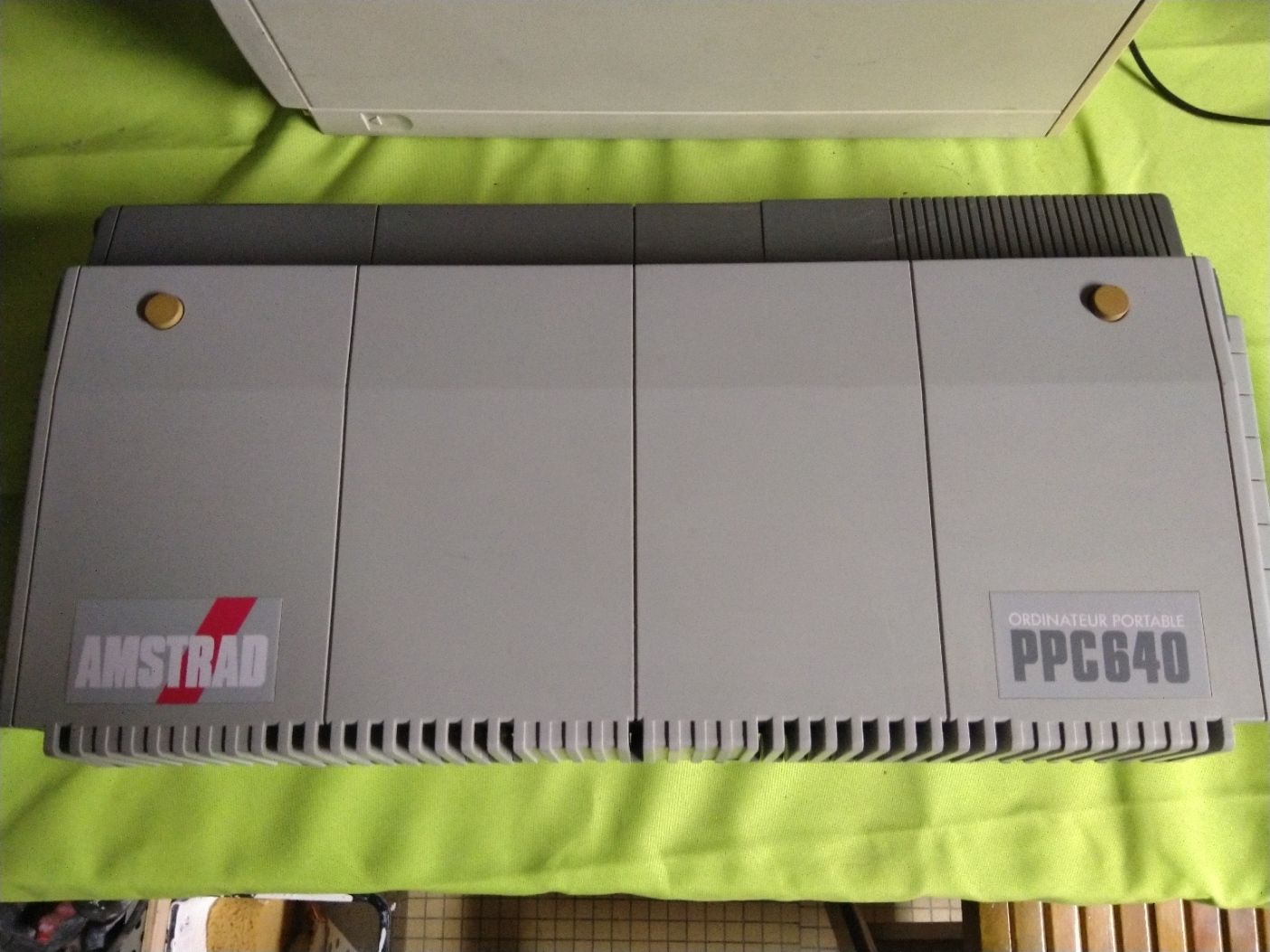 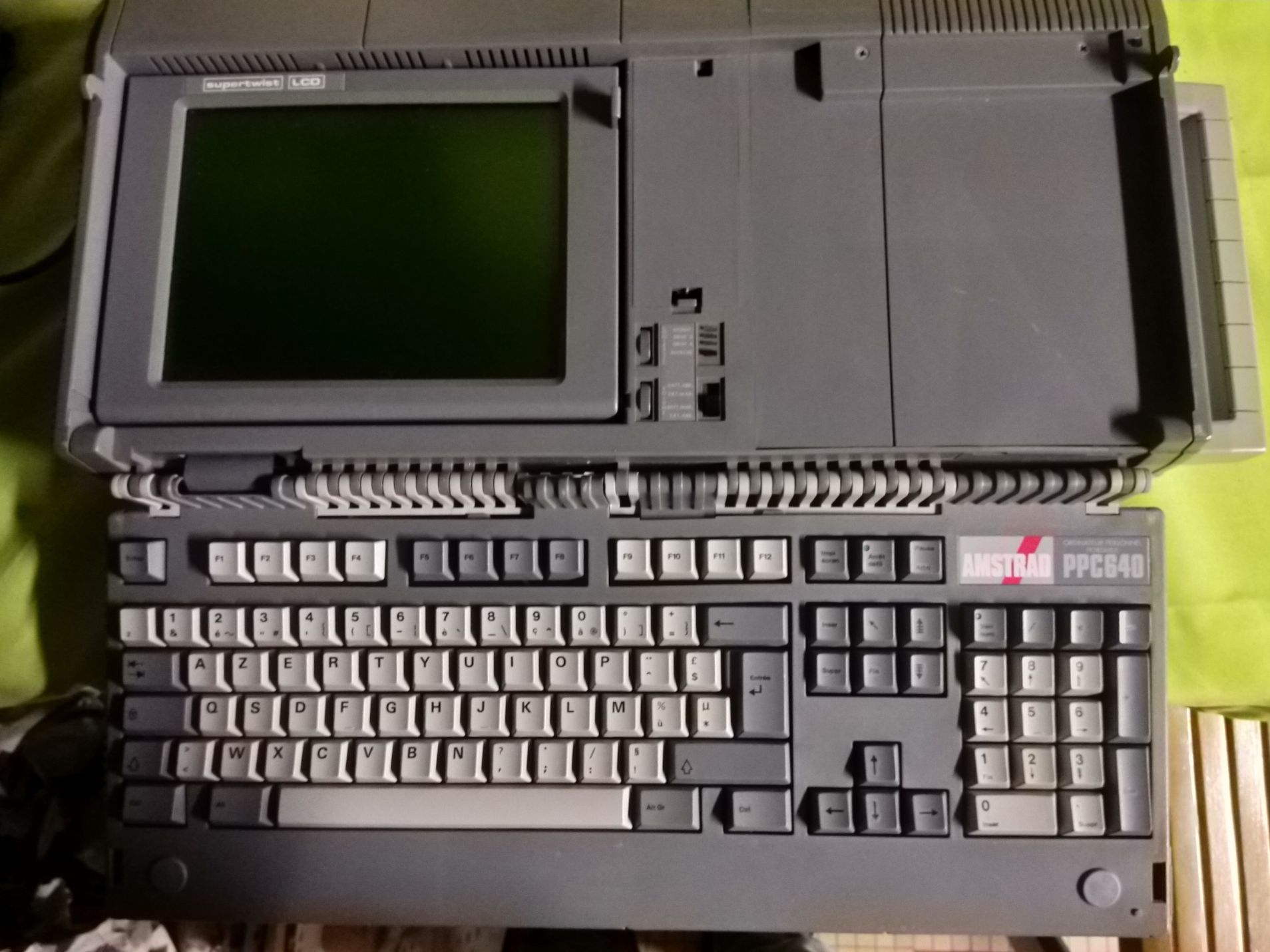 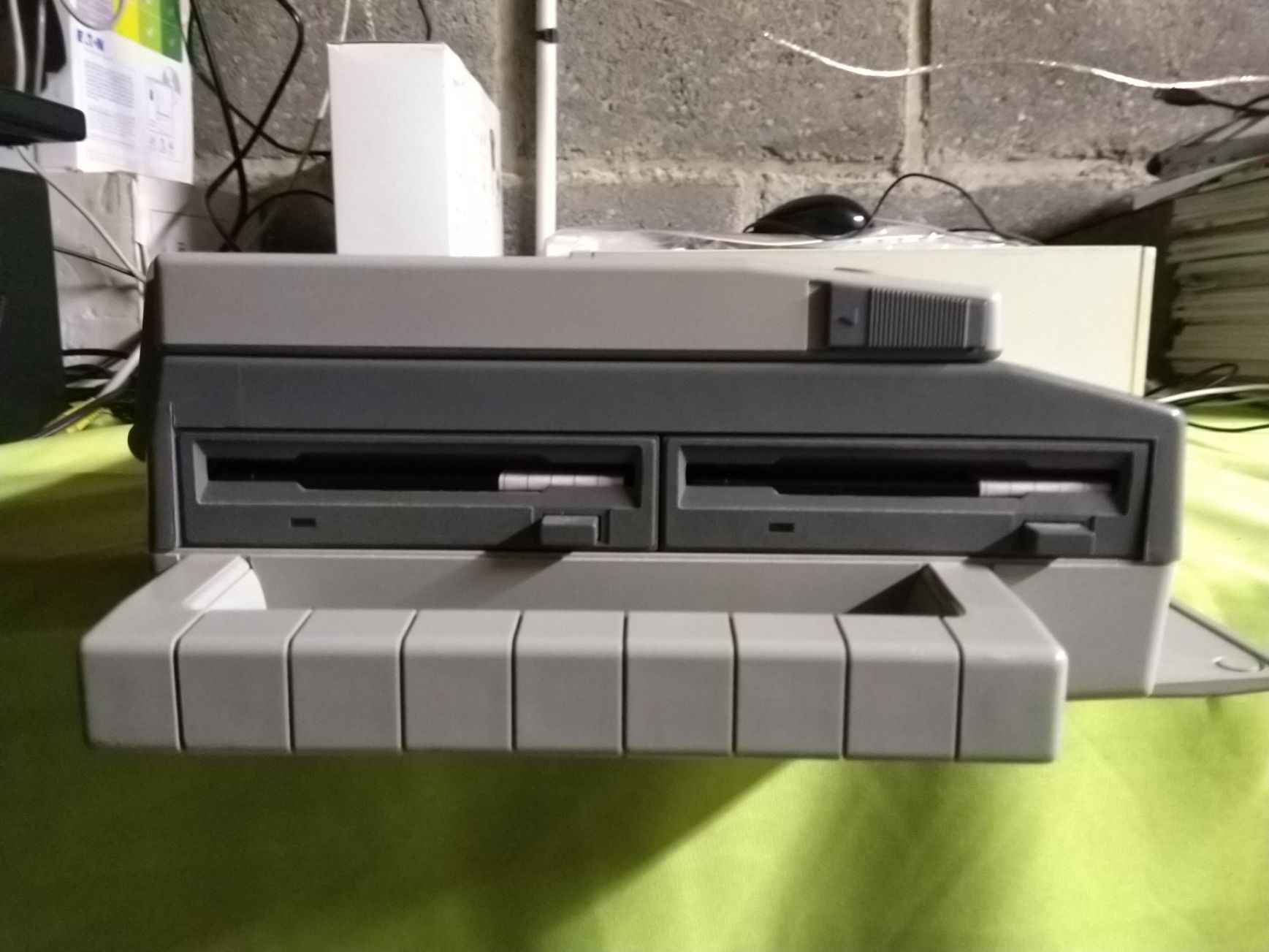 And tonight I am reading on CPCWiki (link below) a quite nice information linking to Hackaday about a modded Amstrad PPC 640 by Retrohax.

He changed one of the two 3,5 inch disk drive with a gotek, but he especially replaced the green monochrome LCD screen with a color screen (coming from a television set) using the MCA2EVGA available on Serdashop. The MCA2EVGA isnt visible as it is now in the room where you could put 1O C size batteries to run the computer (about 1 hour of autonomy).

But even without changing the screen, the MCA2EVGA can be used to connect a VGA screen with the video port at the back of the PPC 640. Doing this you wont need to look for an Amstrad PC 1512 or an Amstrad PC 1640 whose screen can be connected to the PPC 640 for the video (dont forget to change the switches at the left of the PPC) and bring him electricity at the same time, avoiding using its own alimentation.

A new version of the ANSI-C compiler SDCC v3.9.0 is available since the 15th April 2019 for windows, linux and MacOS.

The last version of CHIPNSFX tracker+player suite by CNGSoft is out since the 3rd October 2019.

You can see the 35 games in competition for the CPCRetroDev 2019 on Youtube.

The last version of the C compilator for PC and MacOS z88dk v1.99c is out since January 2019, more details here.

Seen on MO5, a new adventure game is out on Amstrad CPC : ISS Emergency, also on ZX Spectrum, Commodore Plus/4 and C64, and PC too.

ISS EMERGENCY has been originally written for the Commodore Plus/4 et C64 by John Whatson, then adaptated by Gareth Pitchford with DAAD converted by Siz for the other 8bit platforms.

Strand Games has released in 2017 a remastered version of The Pawn, Guild of Thieves and Jinxter by modifying binaries. Since them source code of The Pawn has been found. So it's time for a remastered verion from this original code source which let adding ambient sounds with new adjustable volume, improved sound handling on Linux, item icons and an option to put text below graphics.

If you are interested by the hardware of the Amstrad CPC (and GX4000), you should go read Noel Llopis's Twitter.

His Youtube channel Noel's Retro Lab has at the moment a video about repairing and servicing a 3 inch floppy disk drive.

Fabrizio Radica has written a MOD of the well know instrumental piece of the Alan Parsons Project : Mammagamma (original on the official youtube channel). This track was out on the eye of the sky, released in June 1982 by Arista Records.

You can listen to these three versions of this MOD :

Trantor is a run and gun released in 1987 on Amstrad CPC, edited by U.S. Gold. It was programmed by David PERRY, graphics by Nick BRUTY and music by David WHITTAKER.

On OursoN Retrogames's youtube channel, Kukulcan is showing a speedrun of 4 minutes and 40 seconds on Trantor.

The draw utility by AST/Imp4act Impdraw v2 is out since the 8th November, coming also with the release of iMPdos 512 (a FAT16 ROM for your xMass, M4 or Symbiface 3, it doesnt need Amsdos so an CPC 464 can use it). Click on the source link below for download (at the end of the first message).

Beware, Impdraw uses more than 128 Kb, if you use WinApe please choose 4 Mb of RAM. Also a new version will be out in a few days

There is an interview of Stéphane F. on Amstrad.EU about his game the Carnival Masks which I wrote about last month.

The results of the CPCRetroDev 2019 competition are out, see below. Congratulations too all the teams for their efforts from the last to the first. Writing a game is certainly not the easiest thing to do between programmation, gameplay, graphics and sound. Thanks to you for all your work which helps the Amstrad CPC live still.

I will try to take time to test them all in the following days. My first try will be the 31th game : Cpcrogue as I like roguelike games.

The last version of the CPCEpower Amstrad CPC emulator by Megachur is the v1911 (download link in the first message). The goal of this emulator is to emulates as best is possible the Amstrad CPC, like ACE. For linux users, you must use Wine.

One thing about this version is the game Happy Monty (11th at CPCRetroDev 2019), you should read this article about how the game is done (spanish).

The Aleste 520EX is a russian clone of the Amstrad CPC and the MSX. It works not with AMSDOS but with the MSX DOS (see this russian site in english). There was already a thread about the Aleste 520EX on CPCWiki, but this time Sebastian Blanco is talking about the Aleste kit he just bought. Finally he isnt the only one in the Amstrad CPC community to have one. If you are interesting it's seems to possible to buy one kit by writing to tetroid at inbox ru like Sebastian did.

You can see a youtube video of an Aleste 520EX running the Phortem demo by Condense (and MSX games at the start of the video).

A modified version of Caprice32 permits to emulate at least in part the Aleste 520EX.

Abandonware France has an interesting article about the history of the video game company Cobra Soft, in english.

Then get out your best pens and go to this following page to participate to the contest for the cover of the physical edition of ERIDU : the space port by Jose Javier Garcia Aranda (scramble clone) written with the basic librairy 8BP.

The last version of the Amstrad CPC emulator CrocoDS v2.1 for the Nintendo DS went out in 2013 and is available on github. It is based on the WinCPC emulator by Ludovic Deplanque.

And now Kyuran has ported CrocoDS (RG350) on the portable console using OpenDingux (debian) : the Retro Game 350, which you can find easily on Amazon.

But a Sony PSP or PS Vita will let you emulate the Amstrad CPC better on a graphic point of view :

You can see a vidéo by Oldschool is beautiful (french) which will show you how to use emulators on Sony PSP. To do the same thing on the PS Vita, you can check the site of Wololo.