Defender of the Crown is a strategy game for one player written by Kellyn Beck. This is the first Cinemaware title, originally released for the Amiga in 1986. It was then released on Amstrad CPC in 1989, published by Ubi Soft.

When one of three authors and a second landed on a Amstrad CPC forum, it's a powerful fireworks of valuable informations and more which appears. And it happened on CPCRulez.fr. If you kept your child's soul, it's time that I start to tell you a lovely story: once upon a time, there once was a villain, a hero and a beautiful princess...

The Amstrad CPC version of Defender of the Crown was developed by three people in about 6 months :

Brice Rive and Laurent Boucher knows each other since the computer school right after the baccalaureate, both are fans of programming and electronics (which will be useful later as you will see below). Brice then worked on three other games at Ubi Soft for their copy protection : Skateball, Omeyad and the absolute master. These two partners have also worked on an adventure game : E.X.I.T. released in 1988 still with Ubisoft, developed in nine months between the spring of 1987 and early 1988. During the start of this creation, a few hours of work per day, a lot of time to write the script. Soon they started to work full day, and the last few week, about 20 hours work a day. Their adventure of game creators have been possible partly because they got along well, and partly because it was always interesting to note that the other did not always agree. They have never been afraid to spend hours talking to understand each other fully. Thus they won every battle of Kb. There were no losers. As long as they did not understand each other fully, they discussed. Once the case was decided they returned joyfully to their separate work. Note gentlemen that this working method can probably apply equally to life as a couple !

Brice Rive was called up just before the release of Defender. He made the forcing to complete the project before taking on the uniform. Early in his classes, he squashed the remaining bugs from a phone booth: Laurent at the other end of the line was reading aloud the screen of the Pyradev compile, and Brice was dictating corrections! Imagine the cold sweats at Ubi Soft, Laurence is still shaking by windy day...

Let's talk about the copy protection method of Defender of the Crown, which made it impossible to copy on an Amstrad CPC. Brice has used a a trick of the disk controller, which could read formats that couldnt be written. In short, they worked on upgraded CPC. When the game was released, the company responsible for the duplication contacted the them : they could not copy the BAT ("bon à tirer"). Shortly after the release of E. X.I.T. (one year before Defender of the Crown), a new version of discology appeared up which could copy E.X.I.T. Three weeks of real life business, it isn't much for almost 9 months of work(the protection was not written by them). They were paid both in copyrights, you can imagine the result of sales (pirating is bad, subliminal message). No more royalties from this moment.

There were tools to copy data on disks in a special format. Each sector had a well-defined content : code, sprites, screens, music. No directory of course, only direct access to the disk. From memory, there was one sector per track. The floppy disk controller knows how to read but not write it. This is the trick. On their developpement Amstrad CPC, a switch and a resistor were soldered between a printer port and a part of the floppy drive. The printer port, under the orders of homemade BIOS was ordering the disk controller to stop writing a sector before erasing the following sector. Ubisoft have opened their eyes very wide when they saw for the first time the game on a single diskette (sector size 6, that's 240k for 40 tracks per side or 480 KB of uncompressed data). It was a compact format... At startup, Brice was turning off the OS to install his own, with just enough, to optimize RAM usage. They have spent nights and nights battling to save KB. Brice needed much RAM for his code, and Laurent for the images. They did eat much pizza and drink much beer to work... And the cherry on the cake, a handy utility last: upload and download of their work from CPC to another with a Minitel (model 1B had a reversible modem, 1200/75 or 75/1200, with an external jack to the internal modem). Long live the serial port ! Furthermore the application had a kind of integrated chat, because the phone couldnt be used while transferring via the Minitel. This original chat/transfer program was also found with Defender of the Crown sources. The needed cable between the printer port and the external jack of the minitel was just needing 3 connexions. It was the same cable who permits to download program from commercial servers to an Amstrad CPC. When programming E.X.I.T. such possibility didnt exist still, so backup disks were traveling on a bike (well what about pigeons instead ?).

We can thank Brice Rive for providing the complete source code of Defender of the Crown to the curious. This means we can hope for new versions with more european languages supported, improved graphics (oversan screens ?) especially on CPC + with its improved palette, bug fixes (at least the princess bug). The data (music, screens and sprites) are all in special format readable by the game and utilities written by Brice. Sprites are available as OCP files, the screens in a mosaic in GIF format.

As so often, the game used only 64 Kb of RAM to support the Amstrad CPC 464 and 664. If Brice Rive could have used 128 Kb, he would have improved the playability with less disk access, the animation of sprites during battles, fix a bug that greatly diminishes the appearance of the princesses (and what is a story without a princess I ask you ?). Note that there is no cheat in the game.

The Amstrad CPC version of Defender of the Crown was made without the use of material derived from another port, no sources, no graphics, just playing for hours with the Atari ST version, well with just a rather short article about the internal of the game, as the original developers were not available. Of the 64 Kb of RAM, 32 are used for code, 32 for video. All developed solely with the Amstrad CPC Pyradev compiler.

For graphics, a hacker was responsible for extracting them from the Atari ST version (Tsuno, well known at the time), and a conversion was made from this raw extraction, with an early result needing much work before achieving some satisfaction. Laurent Boucher still has nightmares at night about the Amstrad color palette (small exaggeration) to the point he is still able to recite 24 years later palette and the interleaving in memory ... The purple was essential for shapes, three different intensities from black to white. The degraded red-orange were too mixed for that. They found their natural place where the scene was lit by a fire. Fortunately, there was still no electric light in the middle ages. Laurent Boucher has used many homemade programs for cutting and editing sprites and viewing their animation. Defender of the Crown pictures werent compressed.

Note that there is a recent version of Iphone / Ipad Defender of the Crown . 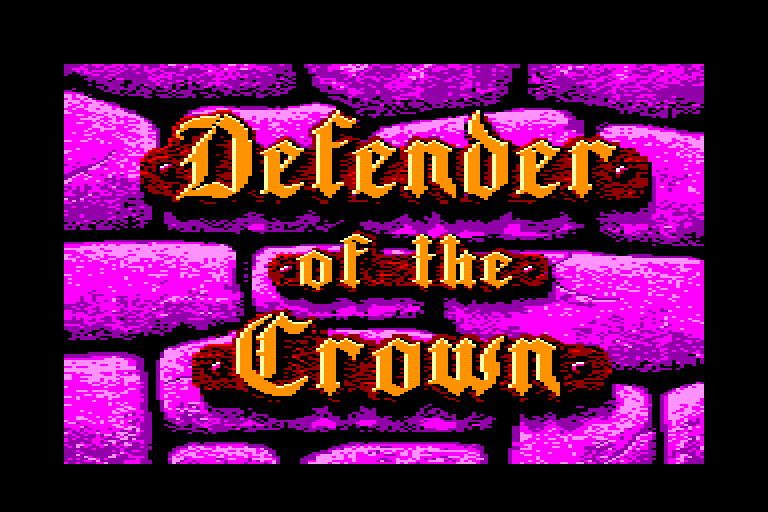