And the pictures of the Mem Card (by RAM7) and the CPC ISA (by Siou) :

New link added, go to STSound for linux to get version 1.0 of the .YM player for X-Window.

New link added, go to AMSSIO, where you will find schematics of the the AMStrad Serial I/O, a serial RS-232 interface for the CPC by Martin Zacho.

Graphic Wizard v1.4 for win9x by C.O.S., converts .BMP pictures to CPC screens, adjust settings of the picture before saving.

You will find the french solution of Maupiti Island if you click on the link. 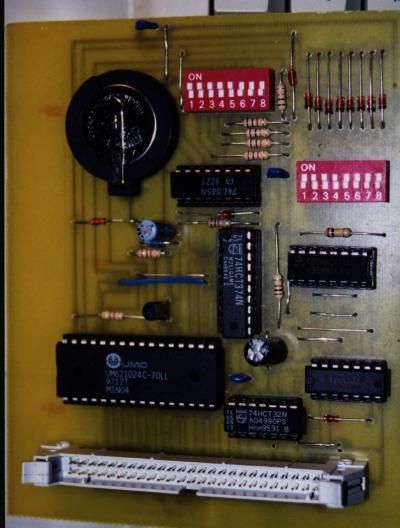 FutureOS web page is now also available in english. Go discover this alternative Operating System for the Amstrad 6128 and 464/6128+. It's a 100% new development, coded in Z80 Assembler. The OS is compatible to the old disc-formats (Data, System, IBM, Vortex and Dobbertin HD20) and file types (binary, ascii, ...). But it's not compatible with Amsdos or CPM programs. Old programs can be adapted, and they may run faster under FutureOS.

New version of Zmac, a Z80 macro cross-assembler, public domain by Bruce Norskog and others, cleaned up somewhat and documented by Russell Marks, tweaked by Mark RISON, C sources only.

The 2 Mo MemCard by RAM7 is becoming slowly available. It's for or 6128 and 6128+, it's compatible with Dk'tronics memory extensions, it plugs on the expansion connector. It uses the same memory managing of the 6128 second 64 Ko bank. It comes with two parts :