CPC Game Reviews has been updated with 7 new reviews.

Arkos did release a new Amstrad CPC utility : WriteDSK v1.0 beta by Targhan/Arkos. It transfers a .DSK (standard and extended) from a dos disk in B: drive to the 3" A: drive (even if only one drive), available as a binary and a ROM.

There is a new feature, you can now search for a file which is on the frontend page, thanks to PHP, MySQL and my own utility Apcb2htm (Another PCBoard 2 HTML converter).

Arkos web site moved. At the same time they release a new Amstrad CPC demo (128 Ko only). I viewed its preview at the Improvized meeting, and now it's out, dont miss it. 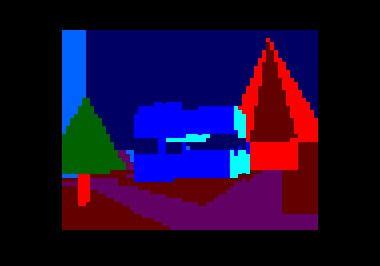 Jason Davis is the author of graphical adventure games for Amstrad CPC, created with "Graphic Adventure Creator " (G.A.C.). These games starting with The smirking horror will be sold again by Cronosoft.

Curious to see a demonstration of SymbOS ? You will see calculator, the task manager and the control panel.

The links are now stored in a MySQL database, which makes it easier to manage. Also a link can be showed in more than one category. I am lacking spanish web sites. If you know such good sites, send me an email, see contact on menu above.

You will find on Pentagon site a nice collection of Amsoft games for Amstrad CPC.

Ramlaid has updated his web site, it's bilingual now, you will find cross development utilities and his demos.

You find for example an update of Zmac, a Z80 macro cross-assembler which nows loads Debug symbol table.

I erased the 25th october news which wasnt accurate. I was writing about a thread of a spanish Amstrad forum , where I understood falsely that they were using CPCKey for the keyboard of an Amstrad CPC put in a PC case. Thanks to Mikel Erauskin which wrote to me about it. Here are the informations he gave me by email :

It actually doesn't use CPC-Key, just a PC keyboard case with a CPC keyboard in it. As you can see, there are some photos from a CPC party with a 464 in a PC-XT case which inspired us. The keyboard of that CPC in a XT uses a DB25 connector, for de 18 wires a CPC keyboard use. In the thread there is also a scheme with the pinout for the DB25 connector I use, because one of the ideas of this "standarization" between the members of the forum that are making their own CPC-AT is that we want, in a posible future meeting, interchange our keyboards, an for example, use my 6128 with a 464 keyboard. The main board of the CPC tries to use as much of the case PC hard as it can. The power is directly fited with a female conector solded to it, as if the main board was a hard disc (12V, grounds and 5V, 4 wires, why more? ;) ) the PC speaker is connected to the internal audio out. The volume is fitted to a not very loud level, because the regulator is not in the case, and have to be opened to change the level, next time it will be external so it can be adjusted easily. Power led is conected to the one at the front of the case, and the "turbo" button for now makes as a power on switch for the main board (I don't like the way the PC's power supply brings down when it is switched down, so this is a temporal workarround util I find a more secure way)

In other thread of the forum named "modding CPC" you will find some 6128 with internal 3,5" floppys, and a photo of how to fit the 34 connector without removing the 26 one, so it can be refited with the 3" drive in case you need that (Also an special mencion of the inverted power conector for the drive is done). I don't remember if was at that thread or other, but I think we uploaded an scheme of how to fit a 3" internal drive to the external second drive connector. The CPC-AT uses 2 3,5" drives, a combination of the "external 3,5" mod and the internal mod... Don't want to spend time with the DS0 and DS1 signals, and the CPC cable is a bit short for that... ;)

For external connectors, apart from the DB25 for keyboard, there is a DB9 (the rs232 from a PC) for joystick (a second one is in mind). Video out is made with the Scart video out cable, furure plans are to make an EGA/CGA output. CPC looks cool in such monitors... Also I've got an EGA one with a SCART plug, just for RGB, no composite input... but it's audio input rocks, EGA with speakers!!!

We are looking for VGA output, but amiga scandoublers (which seems the most "easy" way) are expensive (90-100$) and rare. I've found several cheap IC's which converts RGB to composite video and S-video, then feed an easy VGA box for playstations (30$) and we have this future outputs:

Well now I have to live with just Scart output... Next gadget is a CDROM with the internal audio connected to the Tape-In, so I can load tape games via CD-audio. It works fine, but there is no motor control. I used an old creative 18x cdrom which has full control buttons, stop, play, pause, forward and backbards jump... it's a bit rare, but usefull... But I think a cdrom just with the "play/forward" and "open tray" button is enough. Acelerated WAVs into CDDA rocks!!! ;) also I'm planning a complete external Tape conenctor, so I can plug the audio-out of my packet MP3 player and watch in it's screen "Playing: Bomb Jack.MP3" ;) I found a PC tape deck but 120$ is E X P E N S I V E for just hardware-emulationof a 464 tape

So, as you can see, no CPC-key in this proyect, but is a nice hobbie. It's not a bad destiny for a broken CPC board that I repaired replacing some blowed memories. The case was broken but the keyboard not, so fiting it to a PC case was a nice idea, also for future devices, as RAMROMboxes, serial interfaces, ¿hard discs??? ;)

ConvImgCpc has been updated. You can now save to the compressed OCP Art Studio .PAL format and read them later.

The Amstrad CPC emulator for the GP32 has been updated.

Thanks to Kevin Thacker Contiki is now available on Amstrad CPC. Go to his site to download Contiki for CPC. You need the Utopia ROM to run it :

But I didnt know what to do after it has runned.

You will find on the Phenix Informatique (french) a thread about a project to read ms-dos (FAT12) disks directly on an Amstrad CPC.